International Men’s Day is celebrated on the 19th November in the UK every year.

The day is to celebrate boys and men’s achievements and contributions, as well as to address and raise awareness of some of the issues faced by them, such as their health, suicide and mental health, and homelessness.

This year, Talos Automation decided to raise money for the Campaign Against Living Miserably (CALM). CALM is a leading movement against suicide, the biggest killer of men under 45 in the UK and the cause of 18 deaths every day.

To raise money and awareness, we held a bake sale in the morning – selling baked and bought sausage rolls, turnovers, brownies and cakes to our colleagues.

In the evening, we held a charity FIFA tournament, which was open to everyone at STR. By hosting the charity tournament, we raised money and awareness, and also allowed members from across the whole of the business to spend more time together, build relationships, let off some steam and enjoy themselves.

From the bake sale and FIFA tournament, we successfully raised £141.26.

The results of the tournament were… 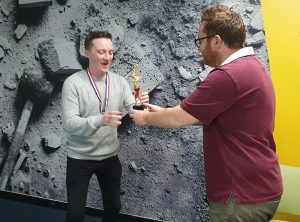 “It was a great day, followed by a very enjoyable evening of colleagues coming together in support of International Men’s Day and the CALM charity. I was obviously thrilled to win the FIFA tournament and take home the trophy, but I think that we are all winners from what we achieved on the day.” – Calum Brown, International Automation Consultant

“The FIFA tournament was an excellent opportunity to raise money and interact with gentlemen from other parts of the business. I have had lots of requests to hold another one by both men and women from the group, which is especially pleasing. We are thrilled to have raised a bit of money but most importantly, we have raised awareness that it’s OK not to be OK and talk about it.”  – Tom Hummerstone, Talos Operations Director.