If Brexit causes a labour gap, could robotics be the answer?

Since the UK announced that it will be leaving the EU in March 2019, there have been growing concerns of a shortage of labour as a result. With fears mounting, could robotics bridge this gap?

In the time since the referendum results were announced, figures show that the UK unemployment rate is at its lowest; down from 5.0% in June-August 2016 to 4.2% in January-March 2018. This is the lowest rate since March-May 1975.

Although the UK unemployment rate is at its lowest, EU net migration has fallen in 2017. But, there are still more EU citizens coming to the UK than leaving.

Today’s figures show that 244,000 more people are coming to the UK than leaving so net migration is adding to the UK population and is at a similar level to early 2014. Looking at the underlying numbers we can see that EU net migration has fallen as fewer EU citizens are arriving, especially those coming to look for work in the UK, and the number leaving has risen. It has now returned to the level seen in 2012.

So, if there was a Brexit labour gap, could investment in the automation industry be the answer?

There are arguments for and against automating jobs to bridge the potential Brexit labour gap.

Robotics can offer productivity and flexibility

If the UK was to invest more in robotic technology for warehousing, AGV, material handling and manufacturing, we could significantly improve productivity as artificial intelligence (AI) and robotics could increase efficiencies in repetitive jobs. We could also improve a business’ flexibility as the technology is always developing. For example, robotic automation technology can now be integrated with vision technology, allowing the production line robotics to recognise products by their visual aspects.

By introducing more AI and robotics to the workplace, this would increase the need for more skilled workers, such as; Programmers, Engineers, and Installation & Commissioning personnel. This would open up an opportunity for the UK to enhance its workforce by upskilling the labour market.

Current investment in AI and robotics in the UK

The International Federation of Robotics reported that the UK’s robotic density of 71 units per 10,000 employees in the manufacturing industry in 2016 was below the global average of 74 units. This ranks the UK as 22nd in the world. This means that it would require significant investment from the UK to use robotics to plug the potential Brexit labour gap. This investment would be used to increase the amount of AI and robotics utilised in the UK and develop current technologies.

Convincing businesses to invest in AI and robotics could be difficult. The RSA’s Age of Automation report shows that only 14% of UK business leaders are currently investing in this technology or have planned to in the near future, while 20% want to invest but say it will take a significant amount of time to do so, and 39% believe the technology is too costly or not yet proven. 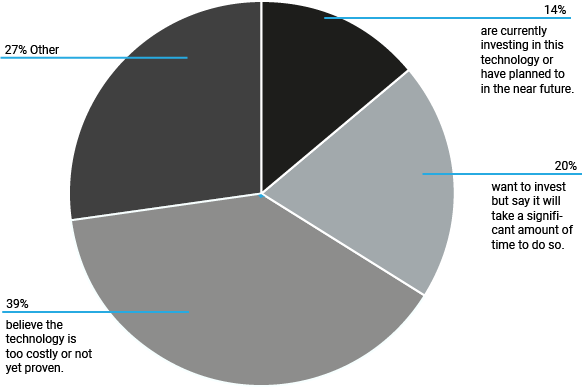 Introducing robotics to the jobs that are going to be hit by the potential Brexit labour gap is impossible for some occupations, especially roles that require interaction.

What do you think? Could investment in the automation industry bridge the potential Brexit labour gap?