Automated Meeting Management is on its way

A New York start-up aims to remove the stress from arranging meetings, by creating a virtual assistant whose sole purpose is to organise meetings.

x.ai created Amy Ingram and Andrew Ingram (initials of AI) to read and interpret emails between two people, then generate a response that books a meeting at a time and place to suit all parties. 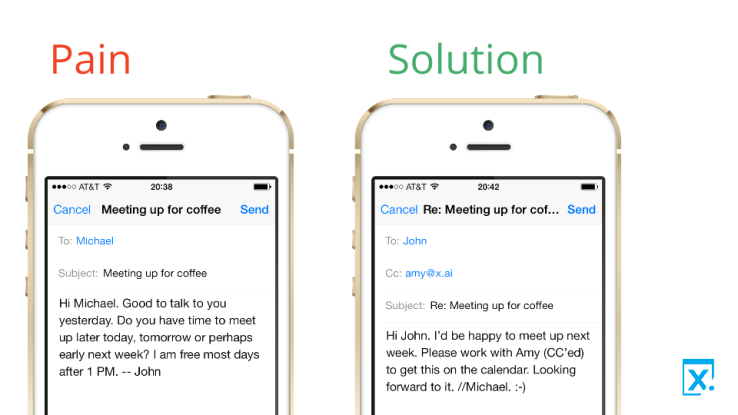 Since launching three years ago, x.ai has raised $35m from investors and Mortensen, founder of x.ai, believes the company can reach the scale of Slack or Dropbox.

Mortensen says “We’re about 90 people who’ve been working on it for 3 years. That might come as a surprise but it’s one of those things where, similar to a self-driving car, it’s very easy to imagine but it’s very hard to execute on. We’ve just invested the time and effort into it.”

At the moment, the writing side of Amy and Andrew is 100% automated, however there is still training being done on the interpretation side of x.ai.

An article earlier this year claimed humans were secretly performing the service; Mortensen insists this is not the case and that human trainers are guiding the system so it learns linguistic intricacies.

Mortensen says: “An AI trainer is sitting at a console saying I agree what the machine labelled as Wednesday is correct. I agree that 4pm is indeed a time reference, correct. Or if someone says ‘have a good weekend’ you need to say that’s not relevant. If the machine thinks it is relevant, you have to say that is incorrect.”

Mortensen gives an example: “Our ability to work out if you want to cancel a meeting is not fully solved. Sometimes we have a very high competence level and sometimes we won’t because people are too friendly. You would say I would love to chat today but things have taken a turn, we should get a coffee in the future — that is you being kind about saying the meeting is cancelled. That is tricky for a machine.”

Sean Masters, the founder of on-demand project and staffing platform Socialprise, who began using the service a few months ago, says there were “a couple of teething issues but they’re just learning.”